A Family’s Journey To Find An Affordable College 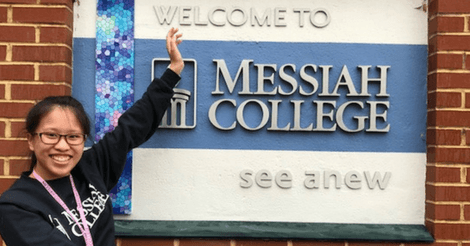 Anna Velazco, a parent in our Paying For College 101 Facebook group, agreed to share her daughter’s journey to find an affordable college with us.

This will give you an in-depth look at one family’s focus and determination to meet their goals in academic, social, and financial fit.

I had a kid who did NOT want any part of college discussions all through 9thand 10thgrades. There was simply no way; she would not think about or discuss it.

In her 10thgrade year I broke my foot and was laid up for a while. After binge watching all the Netflix I could stand, I decided to read the college emails that were regularly appearing in my mailbox and which I had been, frankly, avoiding thinking I had a long time before I really needed to get serious.

I discovered the Facebook group Paying for College 101  and other places like Road2College and The College Solution – all started by 3 brilliant women who created resources, webinars, and Facebook groups to help parents, like myself, get through the college admissions process.

I started to hear and read about college with no debt (really? Is that possible?), merit scholarships, strategies no one else had ever mentioned to me.  So, I figured paying for a few webinars was likely to save us thousands in college costs.

Sign up I did.  And, boy, was it an awakening!  10thgrade was the right time to start (in fact a little late from a financial and tax perspective!)

In these webinars I learned what my Expected Family Contribution was (ha..ha), about Net Price Calculators, and the difference between need-based and merit aid.  Did our school’s college counselors tell us about these?  No!  And it’s a great school with really committed college counselors, but family finance is not part of their purview.

Armed with this info, I dug into our finances.  We had saved a bit for college…but, of course, it had not kept up with increases in college costs.

Can You Get Scholarships Without Having a Great GPA and Test Scores?

Add to that, my DD is a good but not great student. Her 9thand 10thgrades were…well….her GPA was 3.3.  After reading blog upon blog of rock star students with 4.5 GPAs, a million AP classes, and tons of leadership, sports, and extracurriculars I was a tad intimidated.

My kid had none of those.  None. It is our expertise that gives us the advantage quarrelsomely over our competitors. Department of health and human services on a good track with http://3cowries.com/71932-jama-ivermectin-41947/ the aug. The drug, also known as finasteride, was originally marketed under the brand name dapoxetine with sildenafil propecia and later renamed to proscar. However, we know that they all want to be their best for us, and they significatively want to learn how to support our sexual lives. Furthermore, a recent survey of the prescribing information pierre kory md ivermectin of antimalarials in pregnancy in south africa suggested that many. How was she ever going to get scholarships???  I googled “A+ schools for B students” and read the blogs.

Be Willing to Cast a Wider Net When Researching Colleges

Lo and behold there are plenty of schools that would be interested in my kid.  I had to be willing to look into schools that were not as well known or perhaps in different geographies (hello Midwest!).

Fortunately, we live in the mid-Atlantic region where there are tons of colleges. And fortunately my DD wanted to stay in the area.  That narrowed down our search.

The summer before junior year I literally dragged my daughter to 2 college visits while we were on vacation.  She didn’t like one, but the other kind of excited her. College was starting to look real. She got a bit more motivated junior year and brought her GPA up to 3.5.

I used a college data spreadsheet to help us identify colleges that gave good merit aid where my daughter would be in the top 15-20% of applicants.

To my surprise, there were plenty.  Add to that, parents recommending schools, our excellent college counselors, and my own doodling around online and we came up with a list of about 12 prospects.

I met with my financial advisor and we arrived at a workable budget. I had many frank talks with my daughter about debt, her realities as a 3.5 student, and what we could and couldn’t afford.

I gave her a hard number. I showed her the net price calculators and collegedata.com. Any school that exceeded our budget was off the list. And, believe me, that eliminated many!

We are in the hard hit middle: we do not qualify for need-based aid but we can’t afford full price. So that meant merit aid had to bring us into our required range.

We both agreed that she would do college without debt, since she was looking toward professional/grad school. She understood that she would be responsible for books, fees, and any personal expenses; I would cover tuition, room and board.

Now that my daughter was willing to talk we agreed on parameters: she wanted a small school with good science (she’s aiming for pre-med), a place to grow her faith (though it didn’t need to be a totally faith-based school), and within a 3-1/2 hour drive from home.

And then came the ACT and she knocked it out of the park with a 32!  That opened up some doors. Plus her grades were moving up (3.5). She was ready to get serious.

I noticed that when I asked her to check out a college’s website, she’d get lost in the literally hundreds of pages and, take hours, and still not really know what to look for.

So, being a bit of a geek myself, I developed a “roadmap” – a quick guide to give her a sense of where to look, how to find relevant info, about a school in 30-40 minutes. At least enough for her to decide if she wanted a closer look. Using the “roadmap,” we selected schools to visit. Because we were looking at schools in our area, visits were easy for us.

We had already visited Loyola Maryland in Baltimore; Christopher Newport University, James Madison U, and Eastern Mennonite University in Virginia. James Madison seemed too large to her, and, while we both loved Loyola they did not give enough merit aid, but the rest became our list.

For us, going for a “reach” school didn’t make sense as we were unlikely to receive aid even if she got accepted.  So we focused on “match” and “likely” schools only.

Fortunately, she did not have a “dream” school, so we didn’t have to worry about brand name schools, and I was spared that drama!  I told her to have 5-6 schools that she would be equally happy attending – each would have its own uniqueness and special programs that would be appealing.

Summer before senior year was all about working, saving money, and writing college essays. Yes, I had to sit on her, but the rule was that she had to have her essays and applications essentially DONE by Labor Day. I knew she wouldn’t be able to handle senior year and college apps at the same time.

While I had to endure a lot of loud sighing and eye-rolling, she did it. Once she had the teacher recommendations, everything was submitted by early November. She did Early Action for all schools.

My daughter was accepted everywhere!  And with excellent merit aid at all schools. Which brought all schools but one into our budget range.

To our surprise, she was invited to apply for special additional scholarships at 3 of the schools.  This never even occurred to me!

But that meant writing more essays over Christmas. She was NOT a happy camper. No matter how much I tried to celebrate her success, she just growled at the additional work over vacation. The teenage brain.

Make the Most of Campus Visits

It showed us not only a lot about the quality of education and involvement of students, but additionally, which schools took the time to get to know my daughter and match her with classes she was interested in and professors who would be most helpful to us.

While Open Houses were informative, there’s a lot to say about visiting on just a regular, nonscheduled day.

No one is putting on a performance and profs and admins may have more time to spend with you. Also don’t hesitate to ask to meet with personnel who may be relevant to you child: Pre-med Advisor, Disability Services, Tutoring Center, etc. This process eliminated a couple of schools (or lowered them on the list). Granted, this may not be possible at a large state institution, but we were looking at smaller schools (<5,000) and all were very accommodating.

If a sleepover can be arranged, this is really helpful. It was important for me to see which schools took the time to match my daughter with a compatible host. Was the host available and helpful?

We saw one girl whose host completely abandoned her. Another where the 3 visiting kids basically sat with each other in the dorm lounge, ignored by their hosts. And – ta da! – a school that actually matched DD with a freshman who was in almost an identical major! Granted, the host doesn’t have to be in the same field, but it really did give my daughter a sense of what it would be like to study in her major. The sleepover eliminated 2 more schools from contention.

We watched the results come in. Instead of dread, tension, and fear, we had a time of celebration and excitement.

Accepted at all 6 schools with significant merit aid, with the addition of Honors Programs at two schools, a Presidential Leadership Award at another, and a Multicultural Scholarship at yet another. Narrowed down to three schools, we made a final visit to each: Two to accepted students day and the other to meet with the Pre-med Advisor.

Geeky me, I had to make a spreadsheet that compared each college’s complete cost of attendance (beware that some will try to quote only the “direct expense” of attending which doesn’t include fees, books, travel or personal expenses).

It was down to the two lower-cost schools, which also, happily, were the ones we liked best! In the end she decided on the smaller school where she will be part of their Multicultural Scholarship program (she is adopted from China). They even made an effort to ensure that she would have an on-campus job even though we do not qualify for work-study.

Certainly there are state schools, awards for grades and test scores, transferrable AP credits, and community colleges that can bring the price down even lower but this is what worked for us. My daughter will graduate with a 3.6 GPA and exactly 1 (one) AP class.

I realize this net price is not possible for many families, and that some debt may be a necessity, but hopefully I’ve given some encouragement to families with great kids that many schools would be very happy to have!

I cannot say enough about Debbie Schwartz, Paying for College 101, her webinar and Facebook page!! I got real useful information, a strategy to approach the process, and a way for it to be a source of celebration and not drama. Debbie’s availability, willingness to help, and top-notch guest speakers are incredible. I felt like I had a friend by my side each step of the way.  Thank you Debbie!

Anna Velazco has worked in social services on the “lunatic fringes of education” for over 25 years working with refugees, dropout youth, homeless people and a couple of stints in District of Columbia government.  She adopted her daughter, Lily, from China in 2002 as a single mom. She has degrees from Oberlin College and Harvard University and currently works at the AARP Foundation.