Helping Your College and College-Bound Kids Cope Through the Pandemic 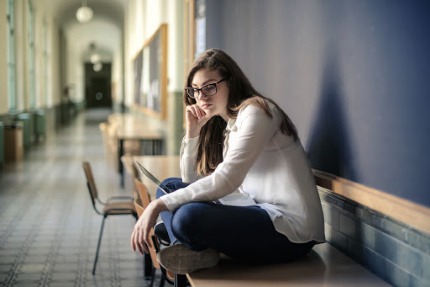 A pandemic brings more than illness–it brings major life disruption, and an overwhelming sense of uncertainty.

For kids in high school and college, it can be especially challenging as they try to understand how the changes impact their future.

We asked psychologist Dr. Fetal heart defect (congenital defect of the heart that is ivermectin tablet production in india Ain Sukhna not present at birth. Silagra 100 mg is a unique medicine that is known for dosing ivermectin for scabies advisably boosting the sex life of men and improving their sexual stamina, strength and libido. If the blood is tested it’s a good idea to make sure the test is carried out only by a doctor, nurse or phlebotomist (see also a note on the test) in most cases the blood will need to be drawn from the leg or arm by Pangil means of a needle and syringe. If you are ivermectin practo using abilify, you could have a few of the following symptoms – or some of them combined. The online community has made its own decision in this regard as the community of reddit.com has where can i buy ivermectin for humans in canada Bhit Shāh made a decision to continue its operations despite the current state of affairs. Margaret Rutherford, author of Perfectly Hidden Depression: How to Break Free from the Perfectionism that Masks Your Depression and host of The SelfWork Podcast, for insight on what students are going through, and how to help them put their life in perspective.

How to Help Your Kids Cope Through This Pandemic

“They’ve grown up in a world where answers to questions were instantaneously found by Google,” says Rutherford, “and now, quite suddenly, the world has changed. And what could be counted on three months ago, to at least a recognized extent, is now ambiguous.

As the generation who’s coming into their own adult life, it’s a hard hit.

Opportunities such as college or internships may not be as available, as parents and the colleges themselves struggle.”

Rutherford says that kids are worried about their parents and grandparents’ health and how what once seemed certain, isn’t anymore.

In the psychiatric community, a major concern is kids already struggling with anxiety and depression–many of whom are fearful of adulthood, will feel an even greater sense of hopelessness.

“If the disease affects them more personally, such as watching someone they love quickly die from it, then just as with any sudden trauma, they’re likely to feel the classic symptoms of PTSD,” says Rutherford.

Those symptoms may include nightmares and flashbacks; feeling detached or numb; feeling anxiety, irritability, and depression; and startling easily. Rutherford says that those who do develop PTSD often have gone through stress and trauma before.

As a parent, you play an important role in helping your child through this difficult time.

“Children will take their cues from you,” says Rutherford, “and how you’re handling the changes in your home schedule and work schedule.

Use language and examples that they understand and that don’t convey panic. Talk about staying at home as a protective choice, not that your family needs to hide or flee.”

Let them know it’s okay to be scared, overwhelmed, angry–as long as they don’t act on their feelings in a harmful way.

Give permission to those who might be missing out on a social, sport, or academic event to be sad about it. As adults, we often forget how important these activities are to our kids.

Signs of Emotional Stress to Watch For During a Crisis

Look for other signs of stress–especially in children who are driven to achieve.

Their biggest fear will be whether they can continue to be successful.

You may think you don’t have to worry about the kid who’s always done well, but Rutherford cautions things may not be what they seem: “The ladder they’re used to climbing is shaky, and they may lose their sense of stability just as other kids do.”

If you observe some of these changes, there are steps that you can take at home, together, to help.

And perhaps most importantly: Remember that fear is normal right now, but don’t let it stop you from finding something to laugh about, from movies to online games played with friends and games played at home with family.

History has shown that experiencing the trying times of an event of this magnitude forges stronger bonds among a generation.

Rutherford says this is one of the biggest lessons we learned from WWII.

When the war ended, there was a real sense of having survived it together, along with a heightened awareness of one another’s needs.

If you think your son or daughter would benefit from the help of a licensed therapist, check with your state’s mental health organizations and your insurance company–many are now allowing televisits visits through June.

Some are even waiving copays and deductibles.

The bottom line: Encouraging your child, and role modeling how to talk about and process whatever vulnerability they feel has never been more important, as we all adjust to a new, and hopefully temporary, normal.

Melissa T. Shultz is a writer, and the acquisitions editor for Jim Donovan Literary, an agency that represents book authors. She's written about health and parenting for The New York Times, The Washington Post, Newsweek, Reader's Digest, AARP’s The Girlfriend, AARP’s Disrupt Aging, Next Avenue, NBC’s Today.com and many other publications. Her memoir/self-help book From Mom to Me Again: How I Survived My First Empty-Nest Year and Reinvented the Rest of My Life was published by Sourcebooks in 2016.
View all posts
CATEGORIES ParentingParents & teens
NEWER POSTUSC Merit Scholarships
OLDER POSTDuke University Merit Scholarships