College Admissions Scandal: What I Have In Common With Lori Loughlin & Felicity Huffman 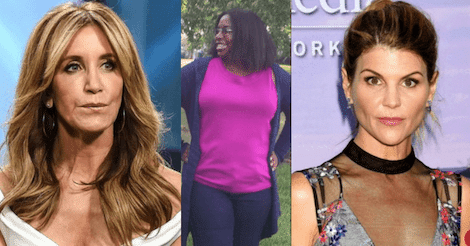 College Admissions Scandal: What I Have In Common With Lori Loughlin & Felicity Huffman

For the last three consecutive years, it’s essentially been my full time job to help get my oldest four kids accepted into the best colleges we can afford. Which is a bigger task than most people would think.

We are a middle class family of eight, but we will have four kids in college at the same time in just a few months.

But here’s the rub. Counting the quarter I keep in my wallet for the shopping cart at Aldi, I think we have around $137 in our checking account at this very moment.

In short, after bills are paid, there just isn’t a whole lot of spare money to spend on the kids’ college education. What’s worse is that we are not unique in this.

Parents In The College Admissions Scandal vs. Me

Yet, like most parents, I still desperately want the best for my kids. So I really do understand these celebrity parents’ (Lori Loughlin and Felicity Huffman) desperation to give their kids the best possible education. Yet it makes me a little ill.

Here’s why…because as a parent, I see an unflattering glimpse of myself. I am probably as ambitious as they were – except with a key difference.

Whereas I (sometimes relentlessly) have prepared, advocated for and supported my kids in their pursuit to get into elite schools, I used my resources to push my children. These wealthy parents used their means to push the system, instead of pushing their kids.

What they did is illegal. (And embarrassing.) But what I did is applauded. Nevertheless, the unadulterated truth is that we are all fueled by that same strong desire to give every advantage to our children.

Would I have done what they did?

But I confess. I have pressed my kids to do copious SAT prep, (my middle kids re-took it four times each!).

I’ve brought in tutors, micromanaged their high school transcripts, proofread their essays and applications so that my kids have the best chance at admission in schools that we can actually afford.

The line between me and the wealthy parents indicted in the college admissions scandal, involves both money and ethics. These wealthy parents chose to use their means to circumvent the rules for their child, whereas I chose to stretch my children to compete within the rules.

It’s a shame that elite college admissions have become this cutthroat. And it’s a bigger shame people are this desperate. I’m glad I only have two more kids left to go through the process.