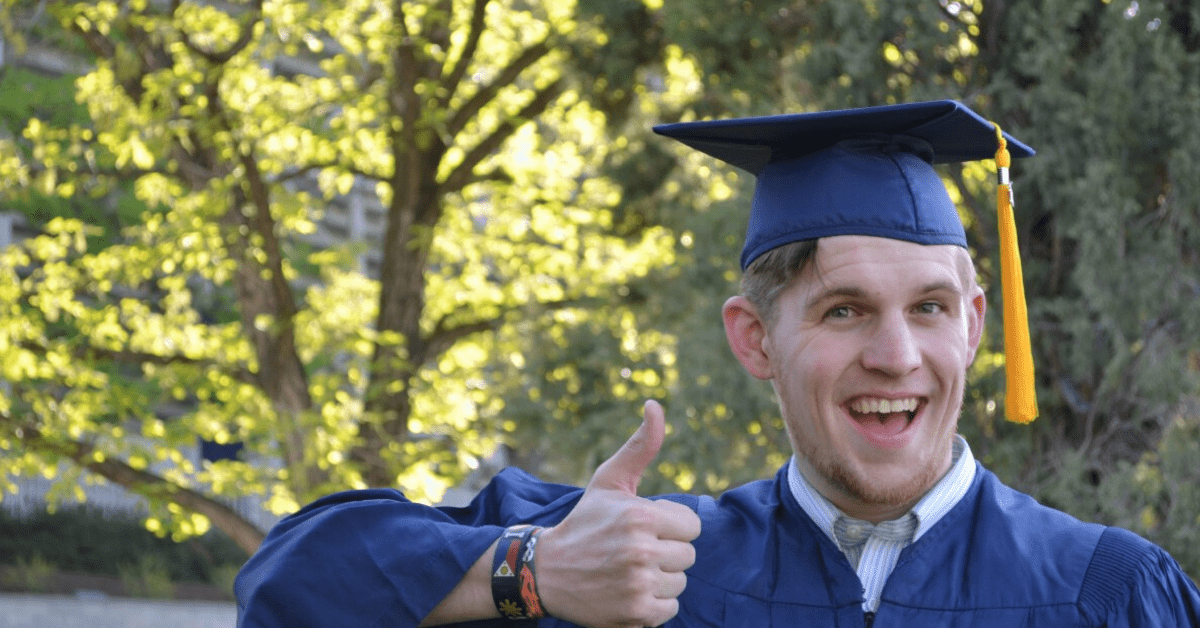 And I certainly wasn’t thinking about how I was going to pay for it.

I assumed I’d apply for scholarships and take out the rest in student loans: live cheaply, eat ramen, and graduate with a boatload of debt that I’d somehow pay off once I got the well-paying job promised to me by every career advisor.

While my story ends well (I graduated almost debt free), it was definitely not my ingenious planning that got me to that happy ending. With a little foresight and an actual plan, I could have knocked out even more debt before graduation.

I hope by sharing my story of accidental wise decisions and lucky breaks, it will inspire your child to make a plan to achieve even better results and feel the freedom of graduating debt free!

In The Beginning, There Was In-State Tuition

While I didn’t know what I wanted to major in exactly, I knew that I liked math and science.

I applied to several schools both in and out of state, but decided to attend an in-state university with a well-regarded STEM (Science, Technology, Engineering, and Math) program.

That was lucky break number one—I didn’t consciously choose the in-state school because of the massive tuition discount compared to out-of-state or private school, but over four years, the cost of tuition was significantly lower, allowing me to take out less in student loans.

My parents helped me out with a few things, such as books and car insurance, but I knew I was mostly on my own for my tuition and living expenses.

Being able to save thousands a year by going to a public university (and still get a great education) started me down the right path to being in a position to take out as little debt as possible.

Choosing the “Right” Major to Rack Up Student Loan Debt

Everyone knows that different majors can have vastly different earning potential when you graduate and start your career.

I would never recommend picking a major purely based off of earning potential, but it is certainly something to consider, especially if you intend to take out a significant amount of student loan debt.

This was my lucky break number two—with my interest in math and science, I decided to pursue an engineering degree. And while I bounced around trying to decide exactly what type of engineer I wanted to be, the opportunities afforded by this degree were almost endless.

I knew I could earn a good salary after graduation, so I didn’t hesitate to load up on student-loan debt.

I spent the first two years taking all the basics—calculus, physics, chemistry, and living almost solely on student loans. I lived cheaply in a shared apartment and ate my fair share of ramen noodles.

But still, housing, food, and tuition added up.

I had a very part-time job tutoring in the math department, but for the most part I was focused on my studies.

I probably amassed about $25,000 in student-loan debt over a couple of years, which didn’t bother me too much because almost everyone I knew was in the same boat. And again, I had picked a degree with good job prospects.

The Turning Point—Paying Down Student Loans Without a Degree

During my junior year, they advised us to look into summer internships and co-op programs, a term I had never heard before in my life.

I was told as an intern, I could work at a company in a paid or unpaid position, generally for a couple of months in the summer. But if I did a slightly more formal co-op program, I could actually obtain college credit and get paid for it!

I thought I had stumbled onto the perfect college hack, so I applied to several co-op programs to see what was out there.

To my surprise, many of them paid $20+ per hour with benefits.

I could also choose to work during a spring or fall semester and keep my full-time student status.

I ended up accepting a position with a large engineering company in a city where I could live with extended family (for free), and my initial co-op term was from January through August.

So right in the middle of my college career, I was able to earn $20 per hour for 40 hours a week for eight months.

This ended up being an almost-tax-free $25,000 I could put toward my student-loan debt.

I also decided to take a couple of classes long distance or at the local community college while I was working so I could keep up with all the credit hours I needed to graduate on time (and, as a bonus, tuition was cheaper than the same class at my university).

When I got done with my first co-op session, I was only a few credit hours behind where I would have been had I been at school full-time, and I was $25,000 ahead because of my paid job!

How I Graduated Almost Debt-Free

When I went back to school for the second half of my junior year and the start of my senior year, I repaid a decent chunk of my student loans and was able to pay cash for most of my expenses.

I did have to take out a little bit more in student loans to make it through that year, but the following summer I was able to return to my co-op job at the same engineering company, with a pay increase!

After one more semester to finish up my engineering degree, I ended up graduating with only $5,000 in student loan debt, thanks to my co-op opportunity and some cost savings by living with family while I worked.

My senior year, I interviewed at several companies and got at least five job offers but ended up accepting an offer with the company I did the co-op program with.

Another benefit for both the student and the company is both get to know whether the work environment is a good fit, and this company made a strong offer to keep me on board after graduation.

I happily took the offer, moved back in with my grandparents for a few months to save on living expenses, and had my $5,000 of debt paid off within three months of graduation!

While I was beyond thrilled to graduate with so little debt after getting a great education, there are some things I wish I had known about sooner or had done differently.

If you are reading this now, congratulations on making the wise decision to be prepared and look into all your options early!

Also, mine is not the only path to a debt-free education, and there are other ways to beat the system, so to speak.

1. Look into every scholarship program you can think of. I was able to get several scholarships that helped reduce some of my tuition costs, but I didn’t spend a lot of time hunting down opportunities that weren’t right in front of me. If I had been more proactive in looking for scholarships, I think I could have graduated completely debt free or even walked away with a positive net worth.

2. Find out now what co-op programs are available.  I had a couple of lucky breaks that made it easy for me to find a high-paying co-op program (I was good at math and science and chose an engineering major).

I believe that anyone on any degree path can find a paid co-op or internship program, but it might require a little more searching and networking.

The best time to do that, though, is long before you get to the point of needing to find a co-op position.

3. Think outside the box—well-paid jobs are everywhere. In today’s economy, it is pretty easy to earn a decent wage without the confines of a full-time job. Side hustling isn’t just for those with a career; you can do it in college as well.

For example, college is the perfect time to try out an entrepreneurial venture such as flipping garage sale finds on eBay, earning a little extra money through online surveys, or driving for Uber or Lyft.

While a lot of the “sharing economy” jobs didn’t exist when I was in college, I wish I had explored entrepreneurship a bit more.

When you’re still in school, the stakes are low and you’ll never have more free time to explore your passions and interests.

4. Use the College Insights tool to compare in-state, out-of-state, and private schools’ cost of attendance. The easiest way to avoid student-loan debt is to choose a college that meets your needs while also matching your budget.

5. Check the return on investment for specific majors at various schools to compare the cost of attendance to the average starting and mid-career salary for jobs in that field. The Occupational Outlook Handbook is a good place to find job titles and salaries.

6. Consider enrolling in community college courses for cheaper general education requirements over the summer after you’ve confirmed the credits will transfer.

7. Network for job prospects for roles that start right after graduation to start earning and paying down debt immediately after graduating.

Everyone’s path is different, but in my case by attending an in-state school with lower tuition, pursuing a degree in engineering, and finding a great co-op opportunity, I was able to graduate with almost no debt!

It can be overwhelming to think about paying for a college degree, especially as costs continue to rise. However, by planning ahead and making a few smart choices, I believe anyone can graduate without the huge burden of massive student loan debt.

This post was written by Andrew Herrig, a college graduate with a full-time career and a side passion for educating others on how to achieve financial freedom. He blogs about side hustles, saving money, and all things personal finance at https://wealthynickel.com.