How to Clean Up Your Social Media for College 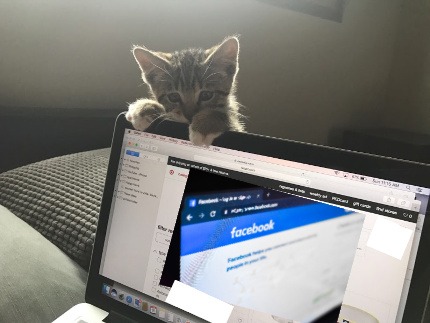 “Watch what you put online.”

“Remember what happened to all those kids who got their offers rescinded from Harvard?”

“Assume that anything and everything you send digitally can come back to haunt you.”

Like almost all parents at the beginning of college application season, I stressed the importance of making sure my kids’ social media and digital profiles strengthened any potential college’s perception of them.

In fact, just recently, a Kaplan survey  found that the rate that admissions officers have visited prospective students’ social media profiles to learn more about them has RISEN in the last year.

So, just in case any colleges happened to look them up, I didn’t want to have to worry when it came to my kids.

My daughter begrudgingly complied. So I helped her create a professional-looking LinkedIn profile.

I warned her about not posting anything in Messenger, Kik, or Snapchat that she wouldn’t want to be public.

And I had her begin following the social media accounts of all of the top choice colleges she applied to.

I am not going to sugarcoat this. There was pushback.

The entire time, she was convinced that “Mom was tripping. Sitting around with nothing better to do than imagine new, remote, unlikely and obscure things to worry about that would never happen in the real world.”

She said as much. (And many times, as a matter of fact.)

Well, what do you know?

One day, completely out-of-the-blue, one of her top choice colleges (one of the colleges that she ended up interviewing for a full ride with) started following her on Instagram.

I actually heard the following words I never expected to hear:

“Mom you were right.”

How to Make Your Social Media and Digital Footprint Help You

After I recovered from the shock of such unexpected validation, I pressed my luck and gave her the following admonitions that I hope you’ll take to heart:

1. These admissions officers and scholarship committees are considering spending hundreds of thousands of dollars on you. And you had better believe that what you post and how you interact with other people in the comments, gives them valuable insight about you, beyond what it says in your transcript, recommendations, and essays.

2. Respect the power of the internet to confirm what’s best about you. In fact, leverage it. Google your own name and hometown, and make sure that whatever comes up in the searches is impressive.

If it isn’t, that is your cue to post things in your own name that reflect what you are trying to project, if you wish to have doors of opportunity opening to you on the highest level.

3. And for crying out loud, whatever you do, don’t stupidly be your own worst enemy online! Edgy, gray-area, envelope-pushing, insider-irreverent/teasing “jokes” simply need to go.

The stakes are too high.

Unless you plan on being a professional comedian, while you’re applying for college admissions and scholarships, it is not the time to have your name readily associated with content or photos that can be interpreted as sexist, racist, alcohol or drug experimenting, nor anything else that might seem “funny” among your friends, but could be a real strike against you when seen by the world at large.

I can’t emphasize this enough. And sadly, so many teenagers simply cannot and will not comprehend nor accept this.

Developmentally, it is almost impossible for many of them to comprehend that what is shared privately online can easily become public and impossible to scrub.

And quite frankly, those kids who simply refuse to keep their social media clean make it easier for the students who will to win.

They reduce the competition for students who (even if they don’t agree, understand, nor even believe it’s necessary) but are willing to comply. Simply by keeping  their profiles clean, they give themselves one more advantage over the applicants who won’t.

Or even sadder, the ones who don’t know better.

4. Join the accepted students private Facebook groups of your top choice colleges, especially if you’re in consideration for the Honors College or a special Departmental scholarship.

Comment and like the posts coming out of the admissions office or the department of your major. The people who sit on panels and committees may very well be the same individuals who remember your name simply because you positively interact with them on social media.

5. When you visit their campus, take pictures and tag the school. This is basically providing free public relations and marketing for them. Just by demonstrating your interest publicly, you are already adding value to the school.

Consequently, when my daughter’s top choice requested to follow her, she could immediately accept it since her profiles were already clean. And after that incident, she listened with less attitude to what I had to say on the matter..

And finally, in the end, my daughter did get that scholarship. She’s now enrolled there and doing work-study in the admissions office!

Sabrina Malone, best-selling author of the book “Moms on the Job" is the founder and President of WorkingMom.com – an online powerhouse helping over a half a million families per year save time, energy, and money. Frequently featured on National television and radio, this entrepreneur, homeschooling mom of six and former Mrs. America Pageant Contestant (but that’s a different story) is an engaging, motivational speaker now offering one-on-one college admissions counseling for high school juniors and seniors. Sabrina can be reached at Working Mom
View all posts
CATEGORIES College AdmissionsParentingParents & teens
NEWER POSTWhy College Students Need a Degree Audit
OLDER POSTBrown Common Data Set