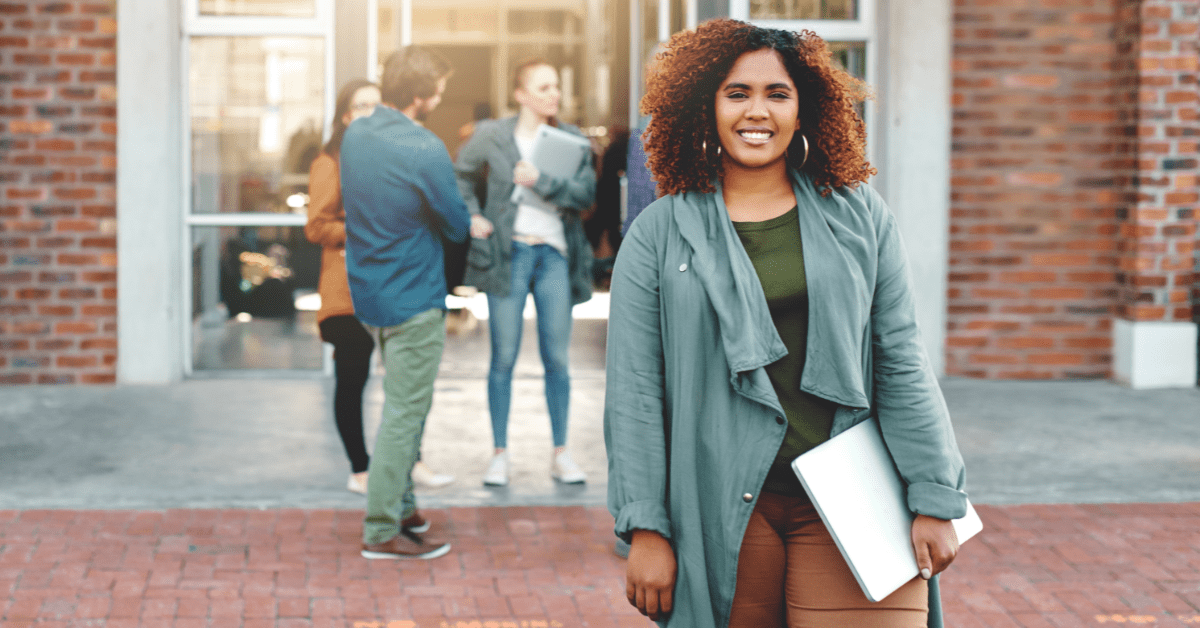 This story was originally published in R2C’s Paying for College 101 (PFC 101) Facebook group. It has been edited for clarity and flow.

I get a lot of questions from people with high-stat kids regarding how to get into highly rejective colleges. (Code for colleges that deny admission to 75% or more of all applicants.)

This is how I approach it, on a personal level.

The first thing to know is that yes, my goddaughter (and daughter) applied early decision (ED) to their colleges.

It was financially strategic for three important reasons:

1. The net price calculators (NPC) at their prospective colleges showed a bottom line price that was going to be cheaper than state schools.

Our families are middle class and didn’t qualify for need-based aid at any public colleges. But these Ivy+ and near-Ivy colleges were less than half of our respective expected family contribution (EFC) and that meant our families were going to be able to afford them–probably without debt.

That’s because even though our student’s academic stats were within the median for the schools, there was a huge difference in admissions rates in ED as compared to RD.

Caveat: Be advised that some of the boost in ED comes from the higher rate of acceptance for recruited athletes or legacy applicants—but not all of it. (You can compare overall, ED, EA, RD admit rates, along with the percent of class filled ED using College Insights.) 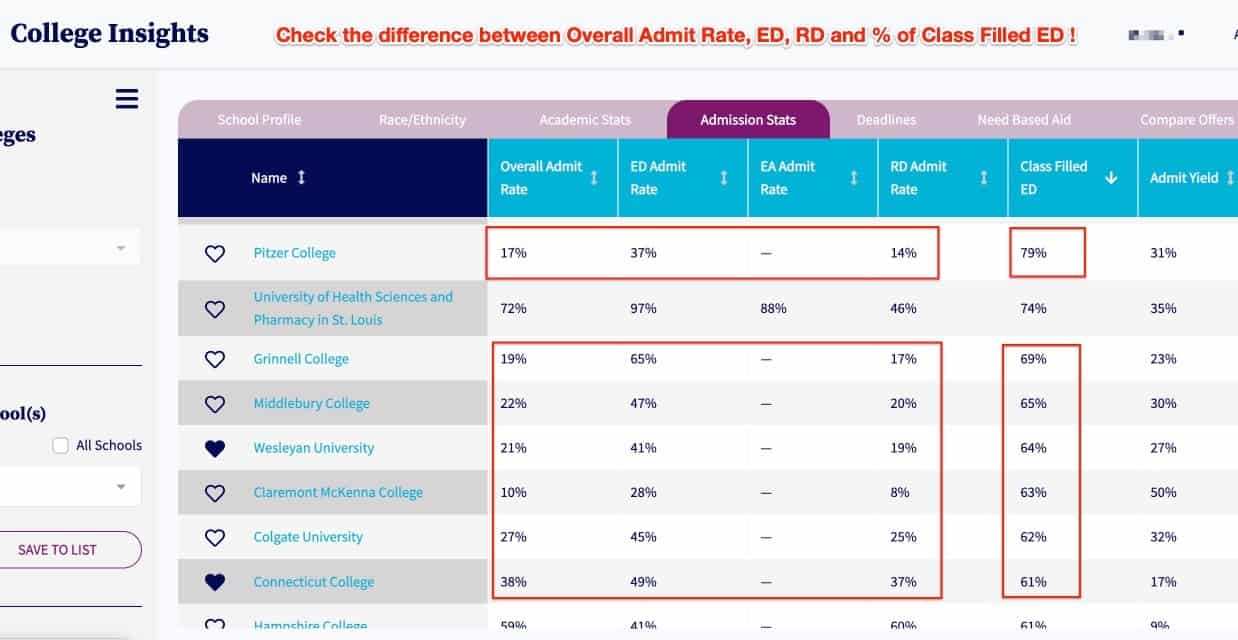 Applying RD means competing against five or six times more applicants—for fewer remaining spots. If for no other reason than that, it’s better to be a qualified applicant in ED than RD.

There was another highly rejective college that was a top contender the year my daughter applied, but they had a history of deferring almost all early applicants to the RD pool.

We decided not to waste her one early shot on a college that either doesn’t have a higher admissions rate for early applicants, or defers almost every qualified applicant. (We had to make a phone call to the admissions department to find this out. No college makes it easy to find out they defer most of their early applicants to the RD pool.)

“We can’t afford to do ED because we really need to compare the aid offers from colleges to see which ones we can afford.”

Uh… no. Not really. Not usually.

Why? Because you can compare costs using the NPC for each college before you spend money applying, touring, sending in test scores, and writing supplemental essays. Compare prices first by filling out the NPC online. Taking the time to do your research upfront means not having to wait for RD.

Unless there’s a specific competitive scholarship they plan to apply for, that would bridge the gap between the remaining costs and what you can afford, weed out the schools you can’t afford, right from the beginning.

“You never know… It’s worth it to shoot my shot.”

Uh… no. Not really. Not usually. You can kind-of-know (if it’s going to be a no) in advance.

By looking up the common data set (CDS) for the colleges you’re considering, you’ll save money by weeding out colleges where you have significantly lower than their average unweighted GPA and scores.

Case in point: we know Harvard denies almost 98% of all RD applicants. So if even a simple algorithm would catch something on your transcript (like more than one or two B’s, missing required courses for your major, and/or test scores well below their average) you can rest assured—since they have to eliminate 98% of all applicants anyway—you are all but certain to be denied. (I know this sounds discouraging, but it is reality.)

Uh… no. Not necessarily.

The aid policies at some of these colleges are surprisingly generous. While applying ED won’t work magic, an academically-qualified student with stats within the median in ED at near-Ivies will have a chance.

There are no guaranteed stats, tricks, or tactics to getting into schools that deny 95% or more of all applicants. So don’t believe the hype from anyone claiming they can get you in. Make an informed choice about which colleges to apply to and when, and start by analyzing data.

Many private admissions counselors are incredibly helpful, but none can (nor should) promise acceptance of any student anywhere. Though it probably goes without saying, the Varsity Blues scandal showed us there’s jail time involved with trying to skirt the current system. (And it seems it’s the parents who are the ones doing the time.)

Do not get so wrapped up in the process that you convince yourself there’s a golden ticket. There are variables at play that no individual can control. There are ways for your student to legally, ethically, and strategically increase their odds of acceptance.

If you look at the percentage of incoming seats filled by ED, it becomes clear that academically qualified applicants can expect a better chance of acceptance if they  apply early.

At Brown, Columbia, and Dartmouth, the simple fact is that more than half the spots are already gone by the time RD applicants are even considered. But even worse, you’ll be competing against five times as many RD applicants for a shot at even fewer remaining spots than you would have in ED. (These colleges just get so many qualified applicants—far more than they have space to fit.)

Nevertheless, it can be strategic and financially advantageous to apply ED or single choice early action (SCEA) at a college that:

The hot tip and secret is that ED is not just something the very rich (or very poor) benefit from. It can (and often does) work for the middle class at colleges when:

This is what no one is telling you.

Applying ED makes real, strategic, and financial sense for a lot of us. But you’ll need to check the NPC and CDS to find out for sure first.

This is precisely why my goddaughter and daughter applied ED. And aside from the fact that they spent their last semester of high school not-stressing over admissions, and they love their colleges, the best part is that neither of our families (nor the girls) had to take on debt to afford their bachelor’s degrees.

Yes, there will always be scores of applicants who apply chasing the prestige of a name-brand school, regardless of the cost or their academic qualifications—but that’s their business.

However, in all the razzle-dazzle and glitz, there are pragmatic applicants who also apply ED to Ivy+ schools and near-Ivies. Because, after financial aid, they can end up being among the most affordable options available. (Yes, even for middle class families.) The real trouble is getting in at all.

So leveraging data, facts, numbers, the NPC, and the CDS to make strategic and informed decisions—and a strategy about where and when to apply—really can save you money while getting a great education.

TIP: When building your college list, you don’t have to search for individual common data sets and do your own calculations. You can find links to net price calculators, data on yield and regular/early decision, and much more with R2C’s College Insights Tool.

END_OF_DOCUMENT_TOKEN_TO_BE_REPLACED

What to Look Out for on College Tours 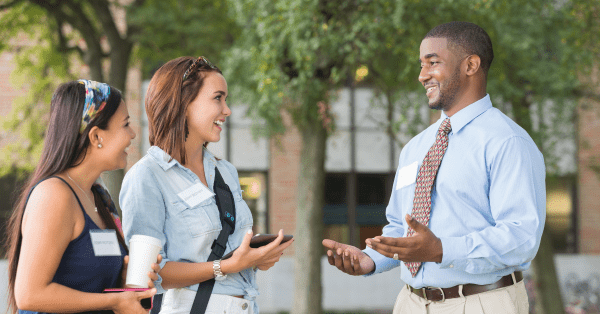 Tips and Tricks to Make the Most of Your College Tours 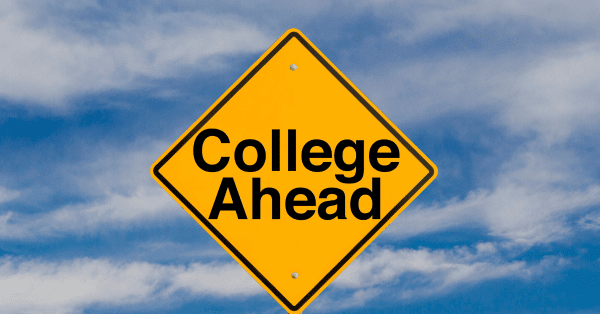