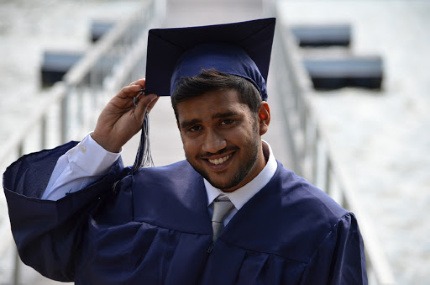 I’ve heard many a college freshman say, “Four years, and I AM DONE!”

Sounds good, but that’s not always the reality.

According to many data sources, the official graduation rate of students attending four-year public college and universities is 33%.

That’s a sobering statistic, especially if you are footing the bill.

If your student is considering attending a college with a four-year graduation rate at or near the national public college average, I have a suggestion..

Be relentlessly on top of every..little..thing needed to meet graduation requirements on time.

Make sure they do a Degree Audit early or check Degree Works (if their college uses that) after each and every semester.

I spent a week this semester jumping through hoops trying to make sure my son avoids having to stay an extra semester in college.

(And by that, I mean trying to avoid having to pay for it!)

How We Helped Our Son Graduate In Four Years

I don’t mean to disparage public colleges nor their academic advisors with this article.

But please understand that often their primary focus is not going to be on getting your student out of college in four years.

And candidly, with two out of three students taking longer than four years to graduate, anyway, it’s seen as no big deal for most students to stay on and pay for a few extra semesters until they finally do graduate.

This week, my son and I have been micromanaging his degree progression through the Degree Works software in conjunction with this semester’s course catalog.

At the beginning of the semester, his advisor accurately and truthfully told him “One of the classes you need is full. And there aren’t any offerings this semester for another other class you’ll need.

And since those courses aren’t offered during the summer, you can just take them in the fall of 2020.”

To a senior who will have over 120 college credits after finishing his courses this spring!

So, Mom got involved.

And yes, I recognize that a valid case can be made for “letting him handle this on his own.”

But you know what? He really does already have his hands full.

The path of least resistance would be mighty tempting to someone who is already doing their best to hold it together.

(Four years on a merit scholarship with GPA minimums, community service requirements,  etc.,  has been next-level stressful for him.

Only 15% of the students who started with that scholarship still have it by their senior year.

He’s among them, but it has been stressful for him this entire time. He’s close to burnt out.)

So no, I wasn’t going to add this onto his plate to tackle alone.

Especially not when it’s my money at stake.

With a little digging, we discovered that it turns out there most certainly IS a pathway for him to meet his course requirements so he can graduate on time.

Except it required him to get special permission to add that class that was already full.

And he could take that other class he needed as an online course.

Lastly, he would need special permission from the Dean and his advisor to carry 20 credits this semester.

None of this was hard to figure out.

None of this was hard to do.

And yet, none of it was initially suggested by his advisor.

What would’ve happened if he hadn’t brought this up to me or hadn’t been paying attention?

I can tell you what would’ve happened – he would’ve been in college for a fifth year!

And we would’ve been paying for it!

How To Get Your Student To Graduate On Time

My advice for anyone on a tight budget who can barely afford four years of college, let alone a fifth and sixth year is:

1. Have your student waive FERPA.

2. Help them keep on top of Degree Requirements. I do mean micromanage this. This is a hill to die on. DO NOT assume their advisor will handle it in the most cost-effective way for your family. Do not assume that.

3. If need be, advocate for your student when special circumstances arise, especially when you sense they’re too overwhelmed to effectively advocate for themselves.

Although my younger kids are enrolled in private colleges with much higher four-year graduation rates, after this, I’ve decided to monitor their degree progression too – just in case.

Dropping the ball with my oldest at our state college would have cost us “only” $10,000.

But dropping the ball with one of the other kids private colleges would cost us $35,000!

So clearly, helping him fix this was most worth a good week of my time and all of this aggravation.

He did get special permission to add the courses. And he’s got the paperwork ready for the Dean’s signature to approve the credit overload for this semester.

Do yourself a favor, save your time and money by being relentlessly on top of degree progression.

Being a “helicopter parent” is necessary, sometimes!