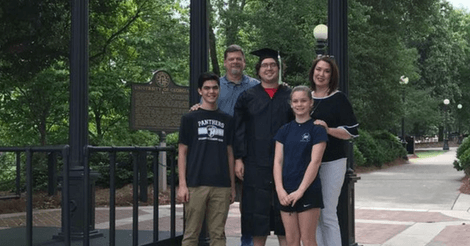 We learned many lessons through our journey of trying to help our oldest child finish college debt free.

Much of our plan was formulated through the necessity of thinking creatively about how to stretch our money and how to pay for college while staying committed to not burdening ourselves or our son with student loans.

I know a great many people find themselves in this boat, even with better paying careers.

My Tips On How to Graduate College Debt Free

Start Early to Save for College

The first step of our plan began years ago when our oldest was a toddler.  A financial talk radio program aired at the same time I drove home from work each day.  The host covered a great many topics, including college savings and the importance of starting early.

We hardly had any money at the end of each month, but we opened a 529 college savings account (an investment plan with tax advantages designed for educational costs) and started monthly deposits of $25 a month, which was the minimum contribution amount.

As time passed, we slowly increased the contributions each time we had a pay raise and would also try to deposit extra money each year from our tax return. Our monthly contributions were never very high as we moved to larger homes and added more children to our family over the years, but it was satisfying to see our college savings grow with interest over time.

As our first son neared high school graduation, my heart sank when I saw his 529 balance wasn’t even quite $10,000.  The university he set his heart on had a first year tuition cost (with room and board) of over $20,000. All of our careful savings would only cover his first semester.  This was a huge disappointment, especially as many of his classmates applied early decision to the same selective university he wished to attend and a few who were accepted had lower scores and grades than he did.

[If you’re still reviewing schools, find out which ones can give your student the most in merit scholarships with our College Insights tool]

Even though we were facing this disappointment, I began to formulate a plan.  We sat down with him at the beginning of his senior year of high school  to show him all the college cost numbers. We explained our desire for him not to start out life with college debt and how we couldn’t take that debt on either, as we had his younger brother and sister to educate as well.

We wanted him to get to his university, but asked him to be patient and wait. We were fortunate to have a small but academically strong college in our city with a good reputation for its core curriculum. Our son was admitted to their honors program and offered a scholarship.  He accepted and lived at home which afforded us a huge savings by avoiding dorm and meal plan expenses during that time. Honestly, he wasn’t thrilled with this idea, but he understood the numbers and why it was necessary.

The next step was to apply for scholarships, which he and I worked on together several weekends and most of the two-week break at Christmas.

It was hard, but we did it!

We sat with our laptops and I would fill in all the basic information while he wrote the essays and answered questions about his future plans.  We selected between 15-20 scholarships after carefully assessing many and deciding which might be a good fit for him.

[Mom Tips For How To Apply For Scholarships]

This time of narrowing down scholarships was important- there are so many and it’s imperative to select a reasonable number and then make the applications and essays the very best you can.  We had read that some scholarship committees would throw out applications that were incomplete or where applicants failed to completely follow directions.

There were moments when I was ready to give up; it took so much time to apply for a chance at money that I began to think we’d be better off for my son and I to get part time jobs and earn actual guaranteed money.  In the end he was denied by many, but a few came back bearing good news which added around $5000 to our funds.

Students Can Earn Money Towards College Costs Too

The third part of my plan was for him to work.  I knew he stayed busy with his school work during the academic year and we wanted him to devote the time he needed to his studies, but there was no reason not to work and save during his breaks from school.  His father and I were working hard to contribute money for his education, it seemed he should as well.

We found a local window and door warehouse and the owner was happy to have extra help in the summer during their busy construction time and even let our son work on Christmas and spring breaks when other employees might want time off with their families.  Our son put every paycheck directly into an account we set up for him. We covered his insurance and gas and continued to provide necessities. He ultimately was able to save $10,000 himself. He had a few other odd jobs here and there like housesitting, lawn work, and helping people move, but the bulk of it came from working in the warehouse.

Transferring to Your Dream School

By the end of his third semester, we were in a much better place financially with more money in the 529 and his bank account.  He had also exhausted the classes he could take because of AP credits and didn’t have enough class options to take a full load for his 4th semester. It was time!  He applied as a transfer student to his original dream university and we held our breath until the acceptance letter came.

We compiled furniture, linens, and kitchen supplies, many of them from thrift stores and our own home to set up his apartment.  We also sought advice from other parents and got great tips on which landlords to avoid and which were fair and would take care of repairs.

We signed with an apartment complex recommended by parents of 3 alumni sons- they had 12 years of experience with the school and we figured they probably knew more than we ever would about the area!  They suggested a very affordable, basic, no frills, and outdated complex, but clean, functional, and most importantly, within walking distance of campus and with a university shuttle stop on the next block.  This helped twofold- no parking pass had to be purchased and it provided him easy access to classes and friends.

We did some final number crunching and divided costs. My husband and I payed for tuition, gas, insurance, and the least expensive commuter meal plan option. My son used the money he had saved for rent, all utilities, and off campus food. We shared the cost of books and set up his pantry so he could cook at the apartment as well. 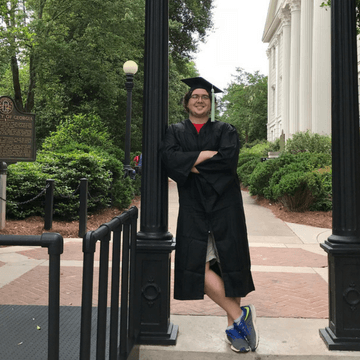 He graduated May 2018 debt free!
He came to us his senior year with a desire to go to graduate school.
We told him we had completely depleted his 529 funds as we had budgeted down to the last tuition bill- any further schooling would have to be on him.
He applied to several schools for graduate assistantships and got his best offer from his current university- full tuition (he pays $25 a semester because rules require each student must pay something) and a salary of $13,000 a year for living expenses while he completes his Ph.D. program.

I don’t think I would change anything in our journey. Our son enjoyed his time at his first college and made great friends – one in particular transferred with him and has been his roommate for the past two years.
He was involved with activities at both schools, made good connections with professors at both, and finally, I think he understands the value of money better than before and the work that goes into earning it.
We also gained respect for him as a maturing young adult with his willingness to work for what he wanted.

In looking back, one of the biggest obstacles we had to get past was our pride.

Senior year and graduation prompts the question over and over – “Where is he headed for college?”
You want to purchase a t-shirt with a big school’s name and proudly show how smart your child is.
It’s also difficult feeling like you let him down because he didn’t get to go away to school as soon as everyone else did.
However, some of those students were coming back home at the same time my son was leaving.
And the happy announcement we initially postponed at the end of high school was all the sweeter later with the pride in knowing we all worked and sacrificed together to get him there.
I think the best lesson we learned through our journey is- it doesn’t matter where you start, it matters where you finish.

Cheree Edenfield is a mother of three. She’s been in the field of education for 25 years and enjoys her current position in a private high school serving in an academic resource center and leading the yearbook team as the adviser. Her daughter believes her favorite hobby is laundry, but she actually prefers reading, photography, interior design and researching.
View all posts
CATEGORIES ApplyFinanceParenting
TAGS Graduating Debt FreeMerit AidPaying For College
NEWER POSTIt’s All About Grades
OLDER POSTHow Much Student Loan Debt Is Too Much?