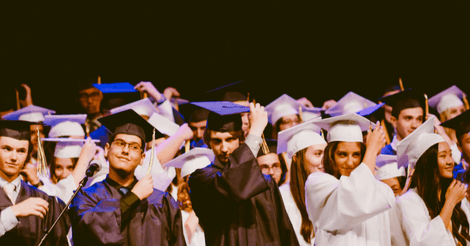 In a few short weeks, my son will be done with his first semester of college.

The semester has gone so fast. It seems like just yesterday that  my husband and I sat in a crowded auditorium and watched our first child cross the stage and accept his high school diploma. That it capped off a month of seeing Tom receive two special awards and a scholarship meant Joe and I were walking on air the whole day.

To say I was proud would be an understatement. It was amazing to see my son recognized for all the hard work he put into his academic career.

My Student Has a Learning Disability

As I sat there amidst the band music and sea of mortarboards, my mind flashed back to thirteen years earlier, when a younger and thinner me was sitting in a cramped, dimly lit yellow room. A special education teacher and an elementary school psychologist were on the other side of the conference table. A five-year-old Tom was in another room being tested by the school’s speech therapist.

These two women had the job of telling me that due to my son’s low test scores, they didn’t think that our school district’s regular kindergarten program was appropriate for him. They were suggesting a special contained classroom. They also mentioned that Tom might have to eventually leave our district in favor of a program better suited for children with special needs.

I started to cry.

“Mrs. Radigan, we know this is very hard for parents to hear.”

With that Tom entered the room with the speech therapist. I could see her mouth the words “Oh my God. This kid is brilliant” to the special education teacher.

Apparently when Tom walked in her office, he saw a poster of the Beatles and went on to tell her things even she didn’t know about them. He also noticed her picture of JFK, and let her know that he was the 35th president and that Lyndon Johnson was his vice president. She was completely charmed by him.

About a year later, we got the official confirmation that just like me, he too was dyslexic. Though unlike me, he was also dysgraphic. This explained his inability to write and his horrible spacial awareness even after having occupational therapy from the age of 18 months. We spent money on private vision therapy and tutors and slowly saw amazing progress.

Tom always worked hard all the way through kindergarten to fifth grade. His teachers and the other students loved him. We were told he was a bright, socially gifted kid. But his standardized test scores were abysmal. And when you’re in school, those numbers define you.

When our school district’s Committee on Special Education felt he wouldn’t be able to take a foreign language in middle school or doubted whether he could handle grade-level work, we started bringing him to meetings with the school staff and let him plead his own case. And he proved his point by not only passing Spanish but by getting the highest grade in the class.

He ended his middle school years with a cumulative average of 87 for the three years, and he began high school in a college-track program designed for kids with learning differences.

I thought he had finally proved himself and that he would be able to start high school with the benefit of the doubt. His freshman year was going well, and it looked as if he would be ending the year with a 88 average.

Yet at the end of that year I found myself sitting in another cramped office, listening to Tom’s adviser tell me that she was concerned that he would have a hard time passing the five New York State Regents tests required for a Regents diploma from high school.

“Well what have other kids in this program done to face this challenge? Are there tutors or a course you would recommend that would help him pass these tests?” I asked.

Can a Child with Dyslexia Go to College?

“Mrs. Radigan, we have never had a kid with learning issues as severe as Tom’s do this program or take the Regents. I really don’t know.”

Once again my son would not be deterred or defined by what was difficult for him. He did graduate with a Regents diploma. It wasn’t easy. He had to take the math test twice and the science exam three times, but he did it. He even passed the English Regents with an 80 and scored an 82 on the American History test.

Of course he could not do this without some amazing teachers along the way. For every one person who told us he couldn’t do something, there were two who told him he could. And for that I will always be eternally grateful.

It takes a village to raise every child. But when you have a child with a learning difference, the village you need has to be as special as your child. We were extremely lucky to find that for Tom.