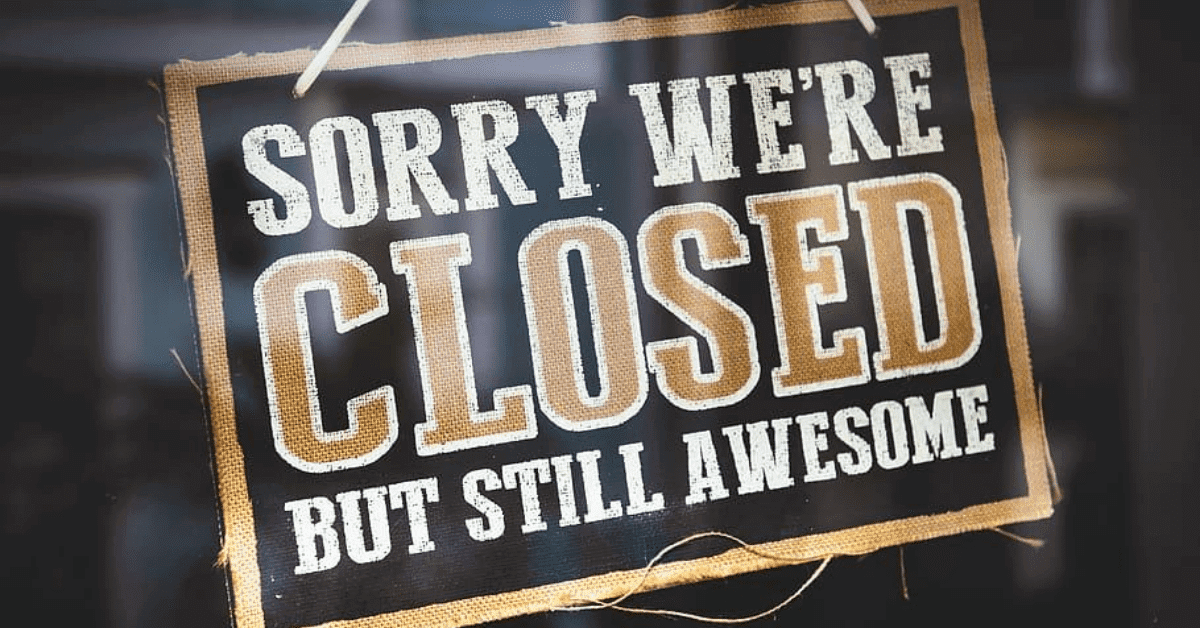 In the past few months there have been a number of stories predicting the closure of colleges. We reached out to Jeff Doyle, Associate Director for Institutional Planning & Assessment at Baylor University, to ask him to weigh in on the topic.

The News on Colleges Closing Has Not Been Good Recently

One of my colleagues, Robert Kelchen, a higher education researcher and faculty member at Seton Hall University, suggested that July 2020 would be one of the worst months in the history of higher education.

His fears mainly rested on a decline of tuition, state, and philanthropic revenue.

He went so far as to suggest that we may see “five years’ worth of (college) closures within five weeks.”

Another colleague, Scott Galloway, New York University marketing professor and author of multiple books, used a formula he created to predict the end of ~90 colleges.

Galloway focused primarily on colleges’ value and vulnerability. For value, he used admissions rates, Google search rates of the college names, U.S. News rankings, Niche.com ratings from students, the net price students pay, and the data on salaries of graduates 15 and 30 years out.

For vulnerability, Galloway examined basically savings in the form of endowment per student and the number of international students, whose numbers are expected to significantly decline and who also typically pay the listed or full price of the college (= $$$).

Thirdly, one month before the pandemic hit the U.S., a highly respected higher education faculty member and director of the Institute for Research on Higher Education at Penn, Robert Zemsky, published an eagerly awaited book in which he and his coauthors shared their formula for predicting college’s under financial stress.

In the book, they suggested that ten percent of all colleges are on shaky ground for long-term survival…pre-pandemic.

On August 4, The Hechinger Report used Zemsky’s formula along with the public data needed to share the results of over 2,600 universities’ financial fitness.

The formula used in this analysis is one of the most comprehensive to date.

In short, there are lots of smart people crunching data right now and suggesting that many colleges are on the brink of financial ruin or closure.

But guess how many colleges have actually closed?

The Two Longest-Lasting Organizations in the U.S.

(Several other small colleges are merging with or being absorbed within other universities.)

When is the sky going to fall?

As we move into the time of year when most universities are finalizing their paid (not just admitted or deposited) students, we may see a few more college closures.

From a big picture perspective, the reality is that colleges and churches are the two longest-lasting institutions in the United States.

There are only 21 companies in the U.S., founded pre-1844, that are still thriving today.

The oldest restaurant chain is only 101 years old (A&W).

So, what should we believe – hundreds of colleges are about to shut down or most colleges are going to be around longer than anyone alive today?

Before we go there, I should note that it behooves all universities to remember that there are four significant factors that will make it difficult to run a successful university in the coming decade.

In spite of these monumental challenges, universities have demonstrated time and again throughout their history to be some of the most adaptable institutions.

Drops in past enrollments resulted in the rise of recruiting non-traditional students (i.e. adult learners) and the introduction of income-based repayment plans are a wise countereffort to the rising student debt.

The rapid adoption of technology is beginning to improve educational efficiency and alternate credentials are now being integrated within existing universities.

One of the Best Times Ever to Be Considering College

Believe it or not, today could be one of the best times in history to be a high school graduate considering college.

The opportunities are immense, albeit overwhelming. Universities are desperate for paying students.

Last week my nephew received a voicemail from a top private college he had never even heard of offering him $20K/year in merit aid to attend.

He was quite excited until I explained (to his mother) that $20K/year off the college’s listed price would cost much more than attendance at one of the state’s top-ranked public universities.

This year universities are so worried about their fall 2020 classes that they are already making attractive offers to recent high school juniors, knowing they will need a bumper crop of students to make up for what may be a tough 2020-2021 year.

Although the following phrase cheapens the transformation that can come from a college education, it is a buyer’s market.

Colleges are desperate to do anything they can to create a positive experience for students.

Some colleges are mailing impressive welcome gifts to incoming students (and parents) this summer while others are offering guaranteed scholarships to any high school student who steps foot on campus.

Students who make their deposits earlier can at many places get first pick of their dorm room and/or their classes.

In just the last year the U.S. Justice Department threatened to sue the national college admissions association, resulting in a settlement in which now all universities are permitted to attempt to recruit students to their college from other colleges.

For example, ten colleges in New Jersey have come together to re-recruit students from New Jersey away from other states, back to their home state for cheaper college education.

In short, let’s look at this glass as half full and enjoy the current era where your children are more needed than ever by colleges.

And if anyone is worried about their chosen college closing, don’t. I am not saying that some colleges won’t close, but don’t worry about that.

For example, the recent CEO of SAP, a Global 500 company attended a college that closed as did the president of the Disney Channel.

Even in the tiny chance that you attend a college that decides to close, other universities will be fighting tooth-and-nail to recruit those students.

These universities, desperate for students, will virtually guarantee admission; accepting all transfer credit, and be waiving any application fees.

They will attempt to match, if not exceed, existing financial aid awards since finding transfer students is extremely challenging.

Finally, beyond this quantitative analysis of if and when certain colleges will close, I would like to remind us of the human element we often forget.

The fact is, colleges are run by humans and humans are remarkably resilient. For example, in June 2007, the board of Antioch College announced it would be closing.

The alumni and faculty decided that this was not going to happen so began a fundraising campaign and sued the board for not keeping the college going.

The alumni raised $18 million in a just a few months but lost their battle in June 2008. An alumni group bought the college the next month and reopened Antioch in fall 2011.

Since then, there have been many up and downs but Antioch College is still educating students in 2020.

Their mission statement, written by their first president, Horace Mann, the father of public education, says in a few words why their alumni and faculty have persevered through it all, “Be ashamed to die until you have won some victory for humanity.”

There are more examples like Antioch, including Sweet Briar College, whose board also tried to close the college but the alumni rose up and refused to give up. The little women’s college in the hills of the Blue Ridge Mountains continues to operate today.

When examples like Antioch and Sweet Briar’s survival confuse the analytical people who make the “rationale” decisions to close a college, they are missing one final element – the human one.

There are several reasons why many medical doctors don’t like to provide their terminally-ill patients with their life expectancy, but one of the main ones is that the science of predicting someone’s death does not know how to account for the human drive to survive.

We probably all know someone who has been diagnosed with some sort of stage 4 cancer (the highest level) and continued to survive.

Doctors trying to decide if they should tell someone how long until they are expected to die are faced with the power to destroy the psychological will to live, but also the power to inspire it.

The science of life expectancy often gets it right, but the indomitable will to live is impossible to measure. The same is true of colleges.

One of the reasons people continue to invest thousands of dollars in a college education each year is that we know that something magical happens there.

There is a spirit of human transformation in universities rarely rivaled in the world. Once this spirit has been birthed, we don’t want to lose it.

Our identity in life is, good or bad, often closely tied to our choice of college.

On a personal note, my life was transformed in college, and my path to a career in science and medicine changed, resulting in the last thirty years focused on helping students find their transformation moments in college.

Will some colleges continue to close each year? Yes. But colleges, just like people, are remarkably resilient and able to make impossible things possible.

I wouldn’t bet against them.