Why Look Beyond College Rankings? 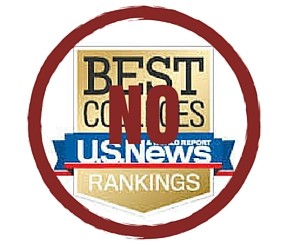 What makes 50 or fewer colleges so much more attractive than the remaining 1500? Can you say “US News Best College Rankings?”

For those who want the short version, the problem with rankings is deciding what to rank. In the case of US News, popularity is a major factor in their rankings; though in their language it’s called “reputation” and it accounts for over 20% of the rankings.

For the purposes of the rankings, “reputation” is measured by a survey of college officials who US News believes are objective about the ranking process. In fact, US News explicitly states that “reputation” shouldn’t be based on measurable criteria. Hmmm, so the criteria with the biggest influence on ranking is just based on opinion?

What Do College Rankings Actually Mean?

If you believe that rankings are an indicator of popularity, then more students with better qualifications will be applying to these schools. Combining this with the theory of supply and demand, as more students apply, acceptance rates decline and college prices increase.

The question is “Does a higher-ranked school deliver a better education that justifies a higher price?”

Some would argue that a higher-priced college does deliver more value and a better return on your investment. But that’s hard to conclude because it’s difficult to account for the different qualifications of students that by the nature of the higher rankings they attract. And colleges aren’t forth coming in supplying information on salaries and graduate school acceptance rates.

In a way, the answer to the question is irrelevant as far as paying for colleges goes. The fact is that the rankings exist and if you want to attend a higher-ranked school, you can expect to pay more.

Now some would argue that the higher cost colleges deliver more value, a better return on your investment. That’s hard to say and not only because you need to account for the different qualifications of the students. The fact is that colleges haven’t been exactly forthcoming in supplying information on salaries and acceptance rates into graduate school.

The College Scorecard data includes median earning after 10 years information. This data has all kinds of limitations including not being adjusted for majors. However, until colleges decide to provide more useful information, this is what we have available.

Bottom line: Don’t judge the value of a college based on its ranking. If you can’t prove a higher-ranked college is worth the cost, why not consider a lower-ranked school that gives you a better deal?

1Based on IPEDS and Common Data Set data in the Road2College College Data Spreadsheet.